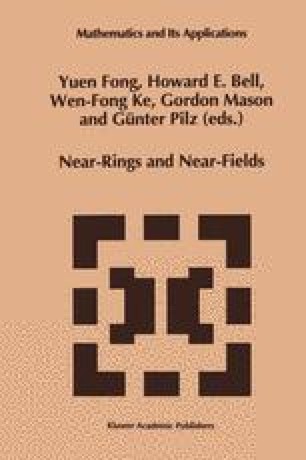 Let N be a right topological nearring. A topological N-group is a pair (G, μ) where G is a topological group and μ is a continuous function from N × G into G such that. This is, of course, just the topological analogue of the definition of N-group as given by G. Pilz on page 13 of [4] and a nearring module or N-module as defined by J.R. Clay on page 261 of [2]. We note that Clay deals primarily with left nearrings while Pilz deals with right nearrings as we do here. For any locally compact Hausdorff topological group G, we denote by N(G) the nearring of all continuous selfmaps of G under pointwise addition and composition. Now, fix a continuous selfmap a of G and denote by N(G) α the nearring whose additive group coincides with that of N(G) but where multiplication is defined by for all. The nearring N(G) α is referred to as a laminated nearring with laminating function or laminator α. If α is taken to be the identity map, then N(G) α coincides with N(G). It was observed in [3] that N(G) α, with the compact-open topology (hereafter referred to as the c-topology) is a topological nearring when G is locally compact and Hausdorff. Throughout this paper, function spaces will have the c-topology. As usual, homomorphisms from one topological algebraic system to another will be assumed to be continuous and isomorphisms will be assumed to be homeomorphisms as well.

Topological Group Open Cover Compact Hausdorff Space Euclidean Group Continuous Surjection
These keywords were added by machine and not by the authors. This process is experimental and the keywords may be updated as the learning algorithm improves.
This is a preview of subscription content, log in to check access.