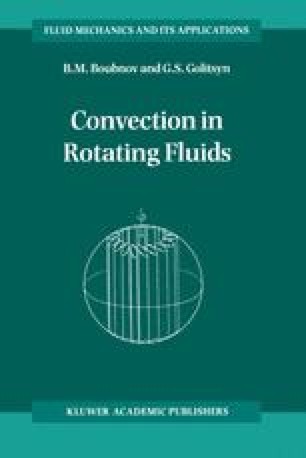 Chapter
Part of the Fluid Mechanics and Its Applications book series (FMIA, volume 29)

In rotating systems centrifugal forces are always present. These forces are described by two additional terms in the momentum equation (1.1): by an addition to the pressure field \( P = P\prime {\rm{ - }}{1 \over 2}{\left[ {\bar \Omega \bar r} \right]^2} \) and by the introduction into the external forces balance of the centrifugal force Ω2r where r is the distance from the rotation axis. The action of the force on fluid particles at different temperatures is equivalent to the gravity force action though their directions differ. The resulting buoyancy force will be determined as the vector sum of these two forces and their ratio is called the rotational Froude number: \( F{r_\Omega } = {1 \over g}{\Omega ^2}L \). In the preceding chapters we neglected this force which is equivalent to FrΩ = 0. For the plane layer this means that there is a basic state: the fluid at rest with the temperature gradient determined by the heat conduction. If there is a component of the external body force perpendicular to the temperature gradient then the fluid solid body rotation is impossible and the basic state will correspond to an axisymmetric circulation with the temperature field depending on the vertical and horizontal coordinates.

Rayleigh Number Centrifugal Force Thermal Boundary Layer Critical Rayleigh Number Ekman Layer
These keywords were added by machine and not by the authors. This process is experimental and the keywords may be updated as the learning algorithm improves.
This is a preview of subscription content, log in to check access.