Particles and Projections in Irish Syntax 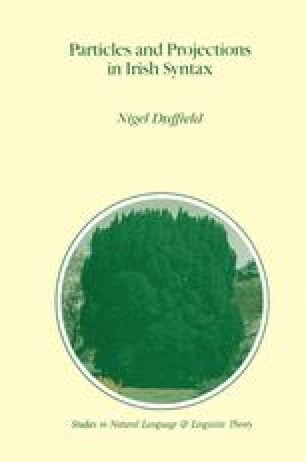 Particles and Projections in Irish Syntax pp 210-265 | Cite as

The focus of investigation in this chapter is yet another grammatical particle, the final preverbal particle to be considered in this book. As was the case with the direct relative particle in the previous chapter, the element to be investigated triggers lenition: again, it will be claimed to do so in virtue of lexicalizing a functional head, in this case Asp° (or AgrO).

Functional Projection Small Clause Case Assignment Accusative Case Visible Argument
These keywords were added by machine and not by the authors. This process is experimental and the keywords may be updated as the learning algorithm improves.

As the letter a seems to have so marry significations, and to serve so marry uses it may be proper here to settle its extent—The letter a, in the modern books in Galic, I believe has as many different meanings as the iod has amongst the Rabinical Doctors of the Jews in their tradition and caballa ... I leave to any one who has the least knowledge of grammar, whether it be possible for even those who naturally speak the language, to distinguish the one from the other, where the whole may recur twice or oftener in one page. In order therefore to fettle the whole, l have consulted the genius of the language, and dismissed all except three, which I explain as follows.... (Shaw 1778 p. 120)