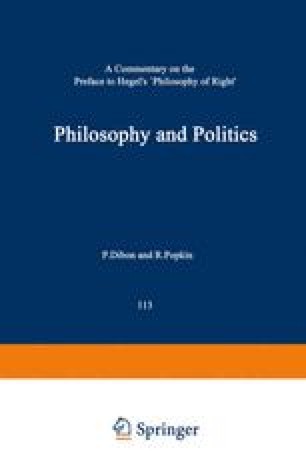 Commentary on the Preface

The Preface 1 to the Principles of the Philosophy of Right, which Hegel finished on June 25, 1829 and undoubtedly wrote after having edited the rest,2 contains not a “scientific treatment of the matter itself”, but an “external and subjective” presentation (par. 20) in which Hegel wishes to realize two objectives. First of all, as is the case in his other Forewords or Introductions, he wants to indicate in a nontechnical and preliminary fashion what the reader should expect from a philosophical treatise, how it should be read, and on which level and with which method it functions.3 A positive explication of the peculiar nature of philosophical thinking concerning right is given by Hegel particularly in the second part of this Preface (par. 12–19). Due to the fact that most “philosophers” of his time did not practice the true way of thinking, however, Hegel precedes this with a polemic. In paragraphs 3–11 he compares his true, speculative thought to another major current, one which was well received and therefore all the more dangerous: a philosophy of feeling, with great pretentions, one of the philosophies of immediate knowing,4 of which J.H. Fries was an infamous example. The examination of this “superficial” philosophy is concerned not only with its theoretical aspects but, since it is a philosophy of right and state, with its practical consequences as well. Fries engaged himself politically by acting as the ideologist of the fraternities. Others, such as the theologian De Wette, also translated their theory into a political position. Both Fries and De Wette were dismissed, causing great upheaval at the university.

Factual Situation Legal Order World History True Concept True Philosophy
These keywords were added by machine and not by the authors. This process is experimental and the keywords may be updated as the learning algorithm improves.
This is a preview of subscription content, log in to check access.