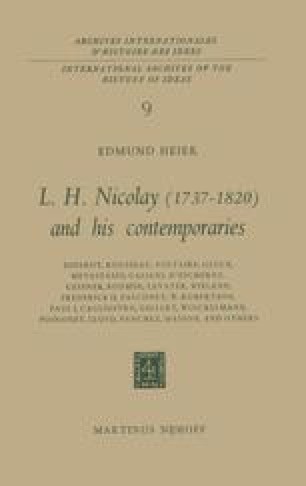 When Nicolay arrived in Russia in 1769 the “philosophic despot” of the eighteenth century, Catherine the Great, had been ruling for seven years. It had been her aim from the beginning of her reign to continue the work of Peter the Great and to Europeanize Russia by establishing direct contact with the West. But while Peter was interested in ship-building and cannons, Catherine’s inspiration was the integration of Western culture into Russia. She summoned architects, sculptors, and musicians from abroad. Her intellectual taste led her to the works of Plutarch, Plato, Tacitus, Descartes, Locke, Montesquieu, Voltaire, and Diderot.1 While Maria Theresa could hardly bear to hear Voltaire’s name, Catherine was in general agreement with his ideology; she sought his friendship and maintained a correspondence lasting from 1763 to 1777. On her accession (1762) she tried to persuade d’Alembert to settle in St. Petersburg and assume the role of tutor to the Grand Duke. Several years later a similar invitation by Catherine was extended to Diderot. He visited St. Petersburg in 1773 and wrote several memoranda for his hostess.2 For one thing, he urged her to introduce compulsory education, a system already in practice in Prussia and Austria. Catherine did introduce a comparable system in Russia but only at the close of her reign.

Eighteenth Century RUSSIAN State Privy Councillor Charles Versus German Reader
These keywords were added by machine and not by the authors. This process is experimental and the keywords may be updated as the learning algorithm improves.
This is a preview of subscription content, log in to check access.