Physics of the Magnetosphere 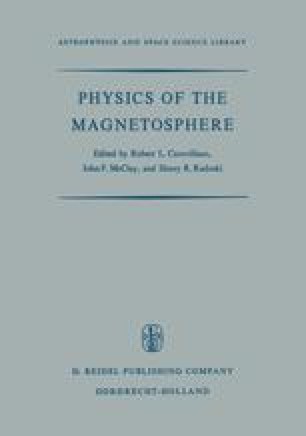 Summary of Experimental Results from M.I.T. Detector on IMP-1

This paper is an extended version of the summary of experimental results reported by Dr. Pai and myself at the AGU meeting of April 1967, in Washington, D.C. The results pertain primarily to the M.I.T. data from IMP-1, launched in November 1963.( Figure 1, taken from Ness (1966), shows the first 30 orbits of IMP-1 projected into the ecliptic plane. Apogee is at about 30 earth radii, and the major axis of the first orbit points roughly toward the sun. The orbital period is about four days so that during each revolution the major axis of the orbit rotates by about 4° toward the dawn side of the earth. In a time span of about four months, the satellite explores a vast region that covers the noon, morning, dawn, and predawn portion of the magneto-sphere in the neighborhood of the ecliptic plane. Furthermore, and this is essential to the discussion, the large apogee makes it possible for the satellite not only to cross the sunward portion of the magnetosphere and the magnetosheath, but also to enter fairly deeply into the interplanetary domain where the presence of Earth’s magnetic field is not felt.

Solar Wind Interplanetary Magnetic Field Ecliptic Plane Earth Radius Collector Plate
These keywords were added by machine and not by the authors. This process is experimental and the keywords may be updated as the learning algorithm improves.

Cite this paper as:
Olbert S. (1968) Summary of Experimental Results from M.I.T. Detector on IMP-1. In: Carovillano R.L., McClay J.F., Radoski H.R. (eds) Physics of the Magnetosphere. Astrophysics and Space Science Library (A Series of Books on the Recent Developments of Space Science and of General Geophysics and Astrophysics Published in Connection with the Journal Space Science Reviews), vol 10. Springer, Dordrecht. https://doi.org/10.1007/978-94-010-3467-8_23