The Logic of Abelard 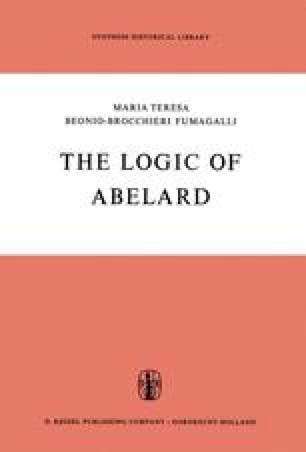 The Problem of Meaning

Having established that the purpose of studying the criterion of truth of speech is logical inquiry, the need inevitably arises, for Abelard, to make a preliminary examination of the meaning of the elements that constitute an ‘oratio’.1 It has in fact been clearly stated that the task of logic is the construction of a ‘propositio vera’ and that the study of the complex element of the expression justifies and requires the study of the atomic elements of which it is composed.2 The ‘significatio’ thus comes to be one of the fundamental factors of dialectic inquiry; though not the purpose of this latter, it is nonetheless a vital introduction to the problem of truth.3

Logical Inquiry Copulative Function Reidel Publishing Company Nominative Plane Appellative Function
These keywords were added by machine and not by the authors. This process is experimental and the keywords may be updated as the learning algorithm improves.
This is a preview of subscription content, log in to check access.