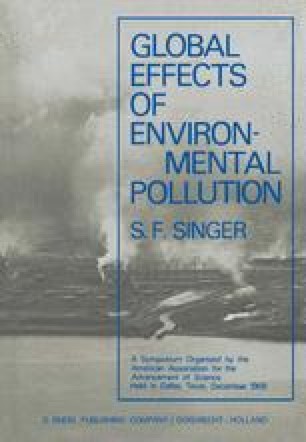 Two globally extensive forms of atmospheric pollution (carbon dioxide and particulate loading) are each considered from the viewpoint of long-term changes in their world-average abundance, and the relevance of these to the observed fluctuation of planetary average temperatures in the past century.

On the basis of significant new data on atmospheric CO2 that has become available in recent years, it is reliably estimated that about half of all fossil CO2 released by man since the 19th century has remained in the atmosphere, and that the doubling time of atmospheric CO2 accumulation from this source is about 23 years. The present-day CO2 excess (referred to 1850) is estimated at 11%; the excess is projected to increase to 15% by 1980, 20% by 1990, and 27% by 2000 A.D. Changes of mean atmospheric temperature due to CO2, calculated by Manabe et al. as 0.3°C per 10% change in CO2, are sufficient to account for only about one third of the observed 0.6°C warming of the earth between 1880 and 1940, but will probably have become a dominant influence on the course of planetary average temperature changes by the end of this century.

The secular increase of global atmospheric particulate loading by human activity is estimated, and compared with a construction of the secular variability of stratospheric dust loading derived from data on volcanic activity since 1850. It is concluded that the total human-derived particulate load is at present comparable to the average stratospheric dust load from volcanic eruptions, but that the variations of human-derived loading are an order of magnitude less than those of volcanic dust loading. For reasonable estimates of the thermal cooling effect of dust load increases, it is inferred that secular cooling due to human-derived particulate loading is currently of the order of 0.05°C per decade. Although changes of total atmospheric dust loading may possibly be sufficient to account for the observed 0.3°C-cooling of the earth since 1940, the human-derived contribution to these loading changes is inferred to have played a very minor role in the temperature decline.

Of the two forms of pollution, it appears that the carbon dioxide increase is several times more influential in raising planetary temperatures than the human-derived particulate loading increase is in lowering planetary temperatures. If, however, the doubling times of particulate loading and CO2 accumulation remain unchanged in the future (15 to 20 years and 23 years, respectively), a further warming of the order of 1°C or more will culminate some time after 2000 A.D., followed by a net cooling as the particulate loading effect ultimately overtakes the CO2 effect. Other environmental agencies, presumably natural ones, are required to account for the main part of the observed fluctuation of world-average temperatures during the past century, and will continue to exert an important influence on climate in the future.

Doubling Time Past Century Volcanic Eruption Particulate Loading Atmospheric Dust
These keywords were added by machine and not by the authors. This process is experimental and the keywords may be updated as the learning algorithm improves.
This is a preview of subscription content, log in to check access.

Cite this chapter as:
Mitchell J.M. (1970) A Preliminary Evaluation of Atmospheric Pollution as a Cause of the Global Temperature Fluctuation of the Past Century. In: Singer S.F. (eds) Global Effects of Environmental Pollution. Springer, Dordrecht. https://doi.org/10.1007/978-94-010-3290-2_15