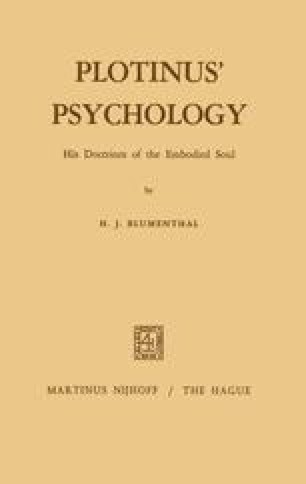 It has often been noticed that the Greek vocabulary was unable to distinguish between sensation and perception.1 Both the receipt of a stimulus by the sense mechanism, and the cognitive act that may follow, had to be expressed by the word αἴσϑησις and its cognates. This does not of course mean that such a distinction could not be made. While the early Greek thinkers, whose materialistic viewpoint would in any ease have made it extremely difficult for them to distinguish sensation from perception, clearly failed to do so, both Plato and Aristotle advanced some way towards a differentiation, and it can be argued that they did in fact succeed in separating the two processes in a satisfactory way.2 I do not intend to discuss this question here, but think it is safe to say that it is by no means immediately obvious that either of them did. Certainly they did not do so with the clarity that one might perhaps expect if the difference had been well marked in their minds.

External Object Sensitive Faculty Single Living Form Alone Sensory Impression
These keywords were added by machine and not by the authors. This process is experimental and the keywords may be updated as the learning algorithm improves.
This is a preview of subscription content, log in to check access.