Variable Stars in Globular Clusters and in Related Systems 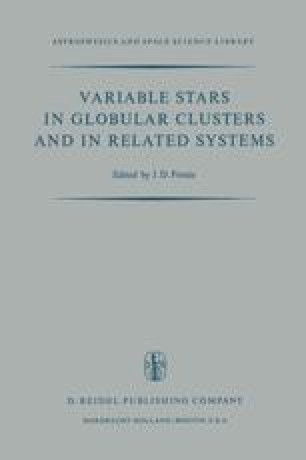 HD 116745 is an eleventh magnitude early F-type giant occurring in the field of the globular cluster ω Cen. Membership in the cluster appears virtually certain since the star’s radial velocity differs insignificantly from the mean cluster velocity of +238 km s−1. HD 116745 lies nearly 4 mag. above the horizontal branch in the HR diagram and is presumably in a rapid, advanced stage of evolution. Spectrograms at 22.5 Å mm−1 and 155 Å mm−1 have been obtained by one of us (R.J.D.) at the Radcliffe Observatory in South Africa using a McGee spectracon image tube. The lower dispersion spectra have been used to measure Hγ profiles and the Balmer discontinuity, and one high dispersion film has provided the basis for a differential curve-of-growth analysis with respect to the Sun in order to determine some heavy element abundances. Physical data derived for the star are M v = − 3.32, θ e =0.77±0.02, log g=1.0±0.3 and M =0.37 M⊙± 0.18 0.37 . Results of the curve-of-growth analysis, in which a model atmosphere was used to determine the curve appropriate to the star, yield a logarithmic iron-to-hydrogen abundance ratio with respect to the Sun of [Fe/H] = −1.2 with a provisional estimated uncertainty of about ± 0.2. This result is based on 28 lines of Fe i. Ti may be marginally overabundant, with a value of [Ti/Fe] = +0.4, based on 7 lines of Ti ii. Other elements and ionization states identified are Mg i, Al i, Si i, Ca i, Sc ii, Vi, Vii, Mn i, Sr ii, Zr ii (Eu ii).

The small mass and possibly enhanced [Fe/H] above the mean for cluster giants (~ −1.7) are not unexpected on the basis of some current models of stars in late evolutionary stages in which most of the envelope mass might be lost, and an enhanced [Fe/H] could result from convective mixing from a region in which hydrogen burning is taking place. Such mixing might conceivably occur when the star is undergoing thermal pulses (driven by the He shell source instability), at times when the H-burning shell source periodically disappears (see, for example, the paper by Mengel at this Colloquium). However the present errors in the abundance and mass determinations are not yet small enough to rule out the possibility that HD 116745 has a mass typical of a horizontal branch star and a composition representative of an upper limit of a small range in abundance amongst the giant stars, which are known to show considerable intrinsic spread in colour in the HR diagram.

Globular Cluster Horizontal Branch Hydrogen Burning Thermal Pulse Royal Greenwich Observatory
These keywords were added by machine and not by the authors. This process is experimental and the keywords may be updated as the learning algorithm improves.
This is a preview of subscription content, log in to check access.

Cite this paper as:
Dickens R.J., Powell A.L.T. (1973) An Abundance Analysis of Fehrenbach’s Star (HD 116745) in Omega Centauri. In: Fernie J.D. (eds) Variable Stars in Globular Clusters and in Related Systems. Astrophysics and Space Science Library (A Series of Books on the Recent Developments of Space Science and of General Geophysics and Astrophysics Published in Connection with the Journal Space Science Reviews), vol 36. Springer, Dordrecht. https://doi.org/10.1007/978-94-010-2590-4_5