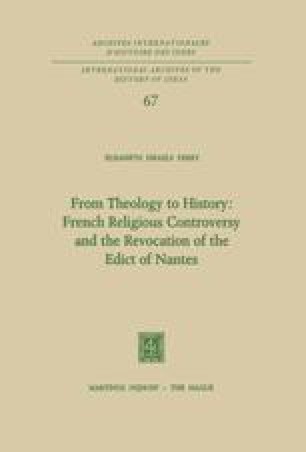 From Theology to History: French Religious Controversy and the Revocation of the Edict of Nantes pp 25-47 | Cite as

The Sources of Argument

Long before the Revocation era, theological controversy had rested on the disciplined and adept quotation of scriptural and canonical authorities. Among Christian controversialists it had been customary to cite chapter and verse from the Bible and to select appropriate passages from Canon Law and the writings of the Church Fathers to prove a point. When the historical argument became popular in religious controversy, the practice continued. At the same time, new authorities were introduced. Writers dared not speak of a past event without mentioning or justifying their authorities, for if they failed to note their sources, or cited authorities in disrepute, they laid themselves open to ridicule. The value of their historical arguments rested ultimately on the reliability of their sources, and on the extent to which these sources were respected in the late seventeenth century. As the polemicists discussed the merits of their authorities, they deepened their own awareness, and that of the reading public, of the use and abuse of history.

Historical Argument Reading Public French Academy Church Father Theological View
These keywords were added by machine and not by the authors. This process is experimental and the keywords may be updated as the learning algorithm improves.
This is a preview of subscription content, log in to check access.

Cite this chapter as:
Perry E.I. (1973) The Sources of Argument. In: From Theology to History: French Religious Controversy and the Revocation of the Edict of Nantes. Archives Internationales D’Histoire des Idees/International Archives of the History of Ideas, vol 67. Springer, Dordrecht. https://doi.org/10.1007/978-94-010-2009-1_2