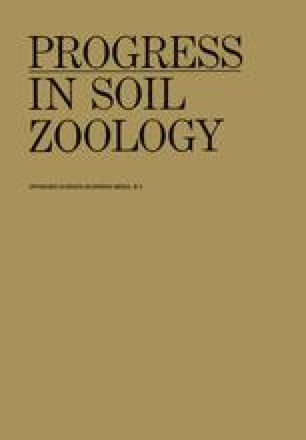 The role of soil fauna of arid shrubland in South Australia

Arid shrublands of southern Australia are of interest to the soil zoologist as an example of a plant association whose stability seems to depend on the cycling of plant nutrients at a rate that appears to be surprisingly rapid for a severe, arid environment (Charley and Cowling, 1968). It is possible that the soil fauna plays a significant part in this system through its effects on decomposition of organic matter. General accounts of arid shrublands in Australia are given by Perry (1970) and Specht (1972). Their principal use is for sheep grazing. All work described here is concerned with the salt bush (Atriplex vesicaria Chenopodiaceae) association of the low shrubland formation (Specht, 1972), and is being carried out in South Australia at Koonamore, 340 km north-northeast of Adelaide, rainfall 190 mm per annum. The climate, soils and vegetation are described by Carrodus, Specht and Jackson (1965) .

Perennial Grass Soil Fauna Australia South AUSTRALIAN Museum South Australian Museum
These keywords were added by machine and not by the authors. This process is experimental and the keywords may be updated as the learning algorithm improves.
This is a preview of subscription content, log in to check access.