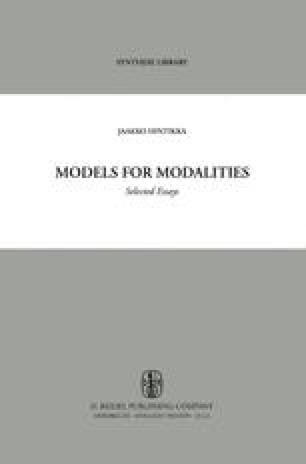 On the Logic of the Ontological Argument

It is much harder than one might first suspect to see what is wrong — if anything — with the ontological argument, in some of its variants at least. By way of criticism, it is often said that the argument fails because ‘existence is not a predicate’. However, there are senses — and what is more, senses other than the purely grammatical one — in which existence clearly is a predicate. It is sometimes said that existence is not the kind of property that can be included in the essence of anything; but the reasons for saying so are far from clear, and the notion of essence is a notorious mess in the best of circumstances. One might suspect that something goes wrong with the logic of definite descriptions in the modal contexts involved in the argument; but I shall try to reconstruct some of the most important aspects of the ontological argument in terms having little to do with ordinary modalities and nothing whatsoever with definite descriptions. In fact, the independence of the essential features of the ontological argument from the theory of definite descriptions ought to be clear enough without much detailed argument. If what we are trying to do is to establish that there exists a unique being “than which nothing greater can be conceived” — in short, a unique supremely perfect Being — surely the great difficulty is to show that there exists at least one such being, whereas we can face the problem of uniqueness with relative calm.

Singular Term Definite Description Logical Truth Epistemic Logic Epistemic Modality
These keywords were added by machine and not by the authors. This process is experimental and the keywords may be updated as the learning algorithm improves.
This is a preview of subscription content, log in to check access.

Cite this chapter as:
Hintikka J. (1969) On the Logic of the Ontological Argument. In: Models for Modalities. Synthese Library (Monographs on Epistemology, Logic, Methodology, Philosophy of Science, Sociology of Science and of Knowledge, and on the Mathematical Methods of Social and Behavioral Sciences), vol 23. Springer, Dordrecht. https://doi.org/10.1007/978-94-010-1711-4_3