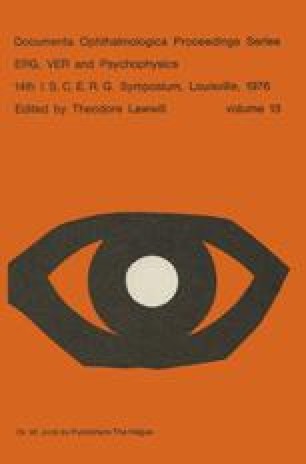 The Correlation of Electrophysiological and Psychophysical Measures: VECP

Electrical responses to visual stimulation are conveniently recorded without risk to human subjects: from the eye, by the use of a contact lens electrode; and from the brain, by electrodes appropriately located on the scalp.

The VECP originates from the massed activity of large numbers of cortical neurons. Individual impulse (spike) potentials do not appear on scalp electrodes because of the severe attenuation of any such signals by the intervening dura, bone and skin tissues that have a high electrical impedance. It is thus the pre-and post-synaptic graded potentials of brain cells, perhaps with the participation of glial cells, that are most likely to generate the complex series of waves that appear in the typical VECP record.

No simple comparison can be made between a subject’s report of what he sees and the VECP waves that arise from the same visual stimuli. The subjective report can describe, for example, the appearance of such complex stimuli as letters of the alphabet, people’s faces, or a landscape extending off into the distance. There is no way in which gross electrodes can differentiate among the effects of such detailed visual scenes. Nor is there any likelihood that the VECP can rival psychophysical methods for detecting stimuli that are so small that they activate only a few receptors and neural conducting units.

Despite the limitations just mentioned, the VECP has often been shown to provide reliable measurements of certain parameters of visual performance.

In summary, the VECP can be used to supplement or replace subjective methods of experimental and clinical evaluations of certain visual functions. Some limitations on the sensitivity of VECP methods have been overcome, but not those due to indirectness and diffuseness of conduction from active cortical sites to the electrodes on the surface of the scalp. Psychophysical procedures are therefore still needed, but their validity is enhanced by the adoption of forced-choice or other relatively bias-free methods of observation. The correlation between VECP and psychophysical measures is highest where the signal-to-noise ratio of each can be enhanced by application of the new advances in signal detection theory.

Implicit Time Binocular Rivalry Scalp Electrode Psychophysical Procedure Psychophysical Measure
These keywords were added by machine and not by the authors. This process is experimental and the keywords may be updated as the learning algorithm improves.
This is a preview of subscription content, log in to check access.