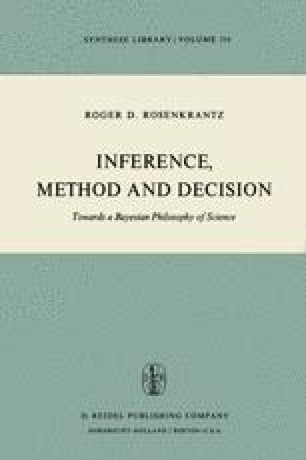 The Paradoxes of Confirmation

There are those who think philosophers have already spilled more ink on the paradoxes of confirmation than they are worth, others who think them among the deepest conceptual knots in the foundations of knowledge. like the problem of free will, the Goodman paradox owes much of its fascination to the way in which it combines urgent and topical philosophical concerns, above all, interest in the inductive roots of language and the linguistic roots of our theoretical construction of the world. My own view is that the paradoxes have at least one lesson, fraught with significance, to convey: that general laws are not necessarily confirmed by their positive cases. I. J. Good1 was, I believe, the first to both point this out and make a convincing case. One of his examples is rather artificial. He invites us to imagine that the live possibilities have been narrowed to just two: either the world contains a single white raven and a vast number of black ravens, or else it contains no white ravens and a modest number of black ravens. (In either case, of course, it may contain other things as well.) Since a random sample of the general population is more likely to contain a black raven in the first case than in the second, the first possibility is confirmed (i.e., made more probable). Hence, by confirming the first possibility (many black ravens and a single white raven), observation of a black raven disconfirms the hypothesis that all ravens are black.

Background Knowledge Light Isotope Transitivity Principle Green Emerald High Prior Probability
These keywords were added by machine and not by the authors. This process is experimental and the keywords may be updated as the learning algorithm improves.
This is a preview of subscription content, log in to check access.

Cite this chapter as:
Rosenkrantz R.D. (1977) The Paradoxes of Confirmation. In: Inference, Method and Decision. Synthese Library (Monographs on Epistemology, Logic, Methodology, Philosophy of Science, Sociology of Science and of Knowledge, and on the Mathematical Methods of Social and Behavioural Sciences), vol 115. Springer, Dordrecht. https://doi.org/10.1007/978-94-010-1237-9_2