Physics of the Solar Corona and Transition Region 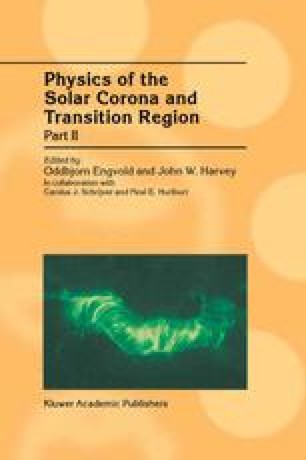 Three-Dimensional Separator Reconnection — How Does It Occur?

In two dimensions magnetic energy release takes place at locations where the magnetic field strength becomes zero and has an x-point topology. The x-point topology can collapse into two y-points connected by a current sheet when the advection of magnetic flux into the x-point is larger than the dissipation of magnetic flux at the x-point. In three dimensions magnetic fields may also contain singularities in the form of three-dimensional null points. Three-dimensional nulls are created in pairs and are therefore, at least in the initial stages, always connected by at least one field line — the separator. The separator line is defined by the intersection of the fan planes of the two nulls. In the plane perpendicular to a single separator the field line topology locally has a two dimensional x-point structure. Using a numerical approach we find that the collapse of the separator can be initiated at the two nulls by a velocity shear across the fan plane. It is found that for a current concentration to connect the two nulls along the separator, the current sheet can only obtain two different orientations relative to the field line structure of the nulls. The sheet has to have an orientation midway between the fan plane and the spine axis of each null. As part of this process the spine axes are found to lose their identity by transforming into an integrated part of the separator surfaces that divide space into four magnetically independent regions around the current sheet.

Field Line Current Sheet Magnetic Reconnection Magnetic Field Line Null Point
These keywords were added by machine and not by the authors. This process is experimental and the keywords may be updated as the learning algorithm improves.
This is a preview of subscription content, log in to check access.