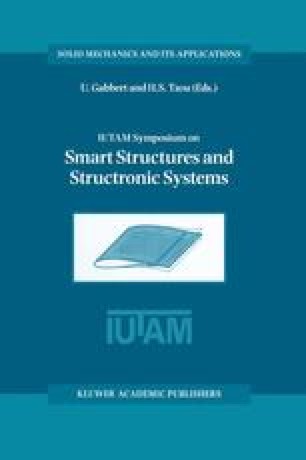 The analysis of a coupled piezoelectric structure has recently been keenly researched because piezoelectric materials are more extensively used either as actuators or sensors. The challenge of developing a basic mechanics model for the piezoelectric coupled structure has been met by many researchers. (1987) developed a uniform strain model for a beam with surface bonded and embedded piezoelectric actuator patches accounting for the shear lag effects of the adhesive layer between the piezoelectric actuator and the beam. A model to account for the coupling effect was later proposed based on the Euler beam assumption (Crawley and Anderson, 1989). (1993) derived a model based on Hamilton’s principle in which the elastic layers, soft-core layers or piezoelectric layers are included. Recently, (1999) presented their research on the analysis of a sandwich beam and plate structure containing a piezoelectric core. In most published literature on the mechanics model for the analysis of the coupled structure, the distribution of the electric potential is assumed to be uniform in the longitudinal direction of the piezoelectric actuator and linear in its thickness direction, which may violate the Maxwell static electricity equation. To satisfy Maxwell equation, a constant electrical potential distribution in the longitudinal direction and linear distribution in flexural direction cannot be assumed but rather obtained by solving the coupled governing equations by assuming a certain distribution of electric potential in the thickness direction (Wang and Quek, 2000).

Thickness Direction Piezoelectric Actuator Piezoelectric Layer Free Vibration Analysis Sandwich Beam
These keywords were added by machine and not by the authors. This process is experimental and the keywords may be updated as the learning algorithm improves.
This is a preview of subscription content, log in to check access.