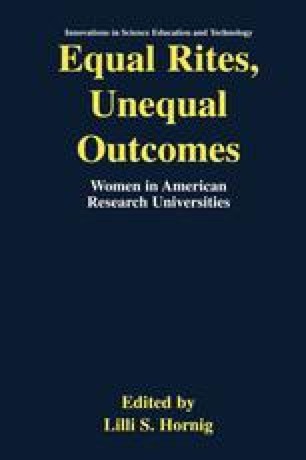 The Current Status of Women in Research Universities

In this chapter we establish a baseline of the position of women faculty at the turn of the millennium, a mark against which future change can be measured. To set this in its proper context we also look back, to the extent possible, at the situation in 1970, just as efforts to increase the participation of women began. It is not only the proportion of women that is of interest, but also their varying distribution among institutions and departments, whether the conditions of their work settings and environments are supportive or constraining, and how these factors have changed in the last three decades.

Assistant Professor Affirmative Action Full Professor Junior Faculty Regular Faculty
These keywords were added by machine and not by the authors. This process is experimental and the keywords may be updated as the learning algorithm improves.
This is a preview of subscription content, log in to check access.