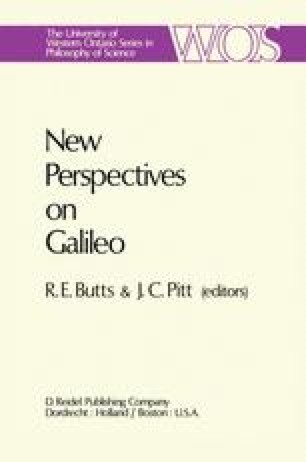 It has frequently been claimed that Galileo is the father of modern science. Historians of science who thus enshrine him claim for him nor only important scientific discoveries, but also the discovery of the telescope, the introduction of the first genuine scientific method, defined mainly by reliance on experimentation, and the destruction of the prevailing Aristotelian metaphysics of his day. Other writers proclaim him for his restoration of Platonism (Koyré, 1939, 1943), or condemn him for introducing the basic elements of a subjectivist view of man destined to lead to no good (Burtt, 1932). In the past few years, we have begun to get new motivation to think about Galileo by new assessments of his work, some balanced (Shea, 1972), others highly skewed and controversial (Feyerabend, 1970). Perhaps it is somewhere between the clear historico-philosophical analysis by Shea of Galileo’s achievements, and Feyerabend’s contention that Galileo was one of the greatest propagandists of ideas in the history of science that the truth about Galileo lies. Certainly enough is now know about this great man of science to realize that it would be a mistake to pin him up in a museum case as just one more ‘father.’

Physical Object Material Object Sensory Quality Secondary Quality Geometrical Theorem
These keywords were added by machine and not by the authors. This process is experimental and the keywords may be updated as the learning algorithm improves.
This is a preview of subscription content, log in to check access.