The Semantics of English Aspectual Complementation 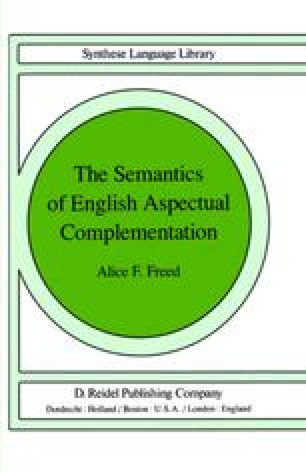 The Semantics of English Aspectual Complementation pp 64-87 | Cite as

A Detailed Characterization of Aspectualizers — I: Begin and Start Compared

There is a great temptation when studying an isolated segment of English grammar to consider independently the syntactic and semantic characteristics of the items under investigation. However, when the goal is to correlate syntactic and semantic properties of particular linguistic elements (here related to aspectualizers and their complement structures), these two types of information must be analyzed side by side. The theme of the next several chapters is a description of the nature and use of various aspectualizers with emphasis on the presupposition and consequence relations associated with the sentences in which the verbs appear. In addition, the interaction of these verbs with the event analysis presented in Chapter II is considered. These are essentially SEMANTIC questions. Yet, since all analysis presented herein assumes the existence of a context in which a given form can be analyzed, it is obvious that the SYNTACTIC shape of the various sentences studied will be an important part of the description. The characteristic structures in which each verb is found will thus be identified. As different forms occur in different contexts, we will be able to conclude that particular syntactic forms can be correlated with specific semantic features and further that particular verbs, because of their associated presupposition and consequence relations, occur in certain syntactic structures and not in others.

Deep Structure Versus Form Characteristic Activity Semantic Characteristic Chapter VIII
These keywords were added by machine and not by the authors. This process is experimental and the keywords may be updated as the learning algorithm improves.
This is a preview of subscription content, log in to check access.

Cite this chapter as:
Freed A.F. (1979) A Detailed Characterization of Aspectualizers — I: Begin and Start Compared. In: The Semantics of English Aspectual Complementation. Synthese Language Library (Texts and Studies in Linguistics and Philosophy), vol 8. Springer, Dordrecht. https://doi.org/10.1007/978-94-009-9475-1_4