Language of the Stars 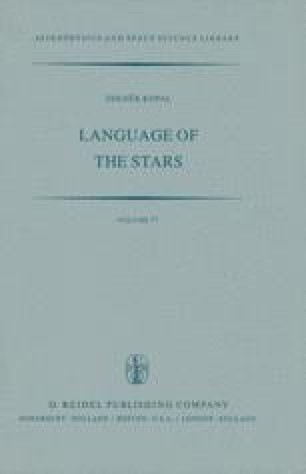 Analysis of the Light Changes in the Frequency-Domain: Spherical Stars

In the preceding chapter of this book we gave an outline of the iterative solutions of the light curves of eclipsing variables in the time-domain for the elements of the eclipses of the two stars. In retrospect, we note that while the problem at issue does not admit of any closed (or even algebraic) solution on account of its non-linearity, it can be solved by successive approximations (the convergence of which will be discussed more fully in Chapter VII). But whichever method we employed in our efforts to decipher the light changes of eclipsing variables in the time-domain so far, we found one auxiliary function consistently in our way: namely, the ‘geometrical depth’ p(k, α) of the eclipse as defined by Equation (0.6). It is this function — rather than the fractional loss of light α(k, p) — which played directly so fundamental a role in all methods of interpretation of the light changes caused by eclipses in the time-domain. Unfortunately, a transcendental character of its dependence on k and α has made it impossible to construct a mathematical solution of the underlying problem otherwise than by successive approximations; and no one succeeded so far to express this function analytically in an algebraic or differential form — no one has, indeed, seen it in any form other than of numerical tables!

Light Curve Light Curf Light Change Geometrical Element Chapter Versus
These keywords were added by machine and not by the authors. This process is experimental and the keywords may be updated as the learning algorithm improves.
This is a preview of subscription content, log in to check access.

Cite this chapter as:
Kopal Z. (1979) Analysis of the Light Changes in the Frequency-Domain: Spherical Stars. In: Language of the Stars. Astrophysics and Space Science Library (A Series of Books on the Recent Developments of Space Science and of General Geophysics and Astrophysics Published in Connection with the Journal Space Science Reviews), vol 77. Springer, Dordrecht