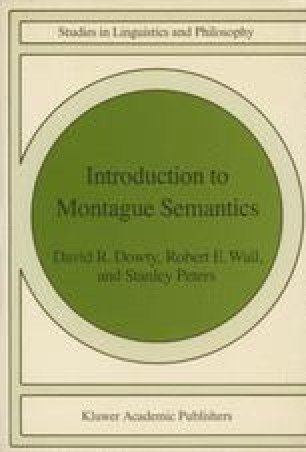 Having worked our way in considerable detail through a particular grammatical and semantic proposal of Montague’s about English, we will step back at this juncture to gain a larger perspective on the general framework of description within which this proposal, and the preliminary ones we developed in earlier chapters of this book, are couched. Montague termed this framework his “universal grammar”, and it is his article of that title that we will now briefly explicate. (For a virtually line-by-line discussion of the article, see Halvorsen and Ladusaw [1979].) A word on terminology is in order to begin with, because Montague used the term “universal grammar” in a different sense than the one it has in linguistics. In the latter field, universal grammar is an account of those features that are common to all natural languages — in particular of the essential characteristics of natural languages, which distinguish them from other logically possible systems of communication such as artificial languages used in mathematics or computer programming, animal “languages” like that of bees, etc. In contrast to this conception, Montague used the term to refer to a mathematical framework sufficiently general to subsume a description of any system that might conceivably be termed a language, whether it is a possible natural language or not.

Noun Phrase Basic Expression Syntactic Category Source Language Syntactic Rule
These keywords were added by machine and not by the authors. This process is experimental and the keywords may be updated as the learning algorithm improves.
This is a preview of subscription content, log in to check access.