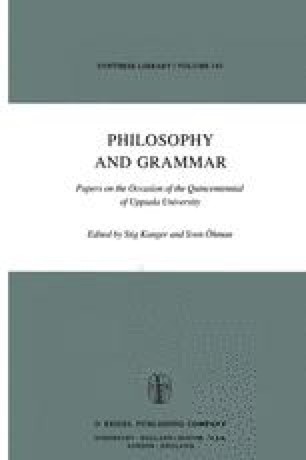 The principle of separating form and meaning in grammar on the grounds that there is no one-to-one correspondence between them is unjustified and leads to the wrong position that form is inherently devoid of content. There is to each morphological or syntactical form (e.g. a case form or a sentence type) a centre of meaning around which are grouped other variants of content in a field-like way. In the speech-chain there is a multidimensional grammatical semantics which is organized as a complicated pattern of interaction between the semantics of world-class, morphology, syntax, context, and situation, respectively. The language-specific structuring of this interaction is the object of grammatical research. For this research sets of features as postulated by semantics-oriented directions within generative grammar can be a most valuable tool as long as they are considered as such and not as semantic systems with an existence of their own. Since they have been established by way of systematizing results from inductive analysis of real languages, induction takes primacy over deduction, and any attempt to unadjustedly regard such sets of features as the semantic basis for existant grammatical forms in a specific language is a violation of the structure of that language. This criticism holds true for all semantic systems put forward within generative grammar because of its separation of syntax and semantics. Thereby the attested grammatical forms are degraded to purely formal, asemantic, surface structure shapes, although they, as described above, in reality form a multidimensional system of grammatical meaning in the speech-chain. The claim of absolutism for generative grammar is detrimental to grammatical science. For systematizing inductively established knowledge, however, the use of sets of features as well as of transformations can be of great help but it should be regarded as one of several methods within grammatical theory.

Semantic System Generative Grammar Grammatical Meaning
These keywords were added by machine and not by the authors. This process is experimental and the keywords may be updated as the learning algorithm improves.
This is a preview of subscription content, log in to check access.