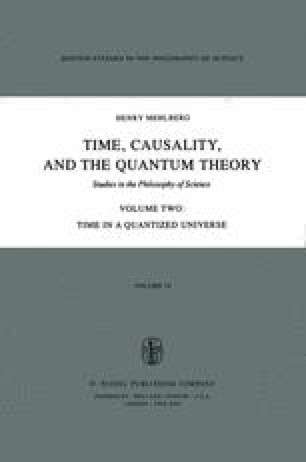 The Ontological Status of Time

In the philosophical discussion concerning the ontology of time, two different questions are usually identified. (1) Is time an entity in its own right, or should it rather be considered as the sum total of relations of succession, simultaneity and duration which obtain among fundamental entities called events or processes? (2) Are the temporal relations which obtain between two events (in the case of simultaneity and succession) or four events (in the case of duration) conditional upon an inertial frame of reference, or do they hold regardless of any such frame of reference? For the sake of clarity, I shall call a time consisting only of successions, simultaneities and durations relational, in contradistinction to antirelational or substantival time, conceived as an independently existing entity. On the other hand, a time depending upon an inertial frame of reference will be termed relativistic, and one which is not so dependent shall be referred to as absolute. This terminology is suggested faute de mieux, even though it clashes with other terminologies used in discussions of time. But the distinction referred to in the proposed terminology is valid regardless of this terminology. A few historical examples can make the distinction clear.

Quantum State Inertial Frame Logical Type Linguistic Formalism Relational View
These keywords were added by machine and not by the authors. This process is experimental and the keywords may be updated as the learning algorithm improves.
This is a preview of subscription content, log in to check access.