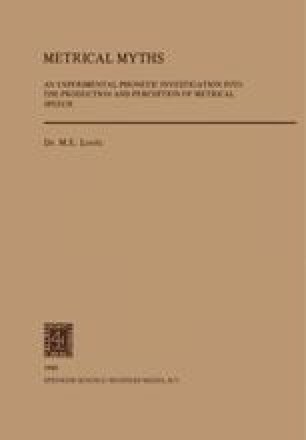 The Acoustic Properties Of The Metrical Foot

As an inheritance of the study of classical verse we are left with the notion of the metrical foot: a recurrent group of syllables with a specific ictus pattern. The ones that occur most frequently in discussions on metre are the iamb, the trochee, the dactyl and the anapest. The trochee consists of two syllables of which the first is ictic, the iamb consists of two syllables of which the last is ictic. In the case of the dactyl and anapest the ictic syllables are separated by two non-ictic syllables rather than by one, the dactyl having ictus on the first syllable, the anapest on the last. In traditional notation these feet are represented by the symbol - for ictus and V for the absence of ictus. These symbols still represent the belief that an ictic syllable is long and that a non-ictic syllable is short.

Final Element Standard Line Nonsense Syllable Metrical Pattern Silent Interval
These keywords were added by machine and not by the authors. This process is experimental and the keywords may be updated as the learning algorithm improves.
This is a preview of subscription content, log in to check access.