Ovarian Function and its Disorders 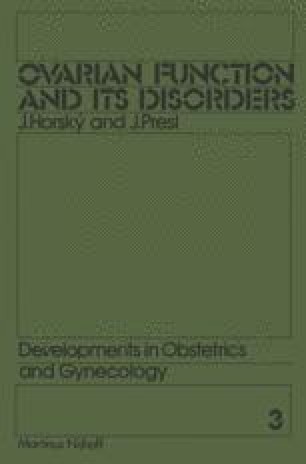 Chapter
Part of the Developments in Obstetrics and Gynecology book series (DIOG, volume 3)

The climacteric in women is the transitory period between the reproductive age and the onset of the senium. It is the period between 45 and 60 years of age. The menopause is the short period of the last bleeding still controlled by ovarian function which as a rule occurs in the first third of the climacteric and divides it into the pre- and postmenopausal period. The premenopause lasts about 4–5 years, gradually the ovulatory function and progesterone production recedes and frequent irregular bleeding occurs till menstruation ceases. The postmenopausal period is characterized by gradual extinction of ovarian function. The senium starts after the age of 60 by regression of anabolic steroid production in the adrenals. This classification was adopted by the International Federation of Gynaecologists FIGO (for review see 252). Previously the term climacteric and menopause were frequently used as synonyms.

Oestrogen Deficiency Atrophic Change Ethinyl Oestradiol Climacteric Symptom Postmenopausal Period
These keywords were added by machine and not by the authors. This process is experimental and the keywords may be updated as the learning algorithm improves.
This is a preview of subscription content, log in to check access.

Cite this chapter as:
Horský J., Presl J. (1981) Climacteric and Menopause. In: Ovarian Function and its Disorders. Developments in Obstetrics and Gynecology, vol 3. Springer, Dordrecht