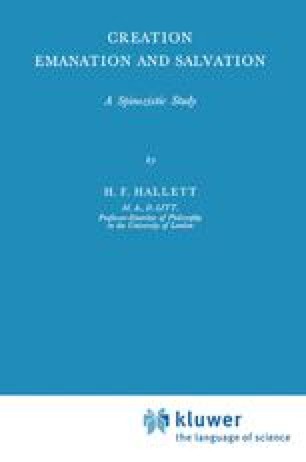 In the foregoing chapter we have been concerned with the world presented to the human percipient in “experientia vaga” without ostensible rationalization, yet congruent with the ‘aptness’ of the percipient’s body to be ‘affected’ by, or to ‘affect,’ what is other, already tacitly rationalized as spatio-temporal and qualitied. This world is perceptually naive, but issues from durationally conative sources that are naive in a more radical sense: what I have styled “the ‘Bergsonian’ inchoation.” We come now to the consideration of some general features of further ostensible rationalizations of the world of experientia vaga, undertaken as a result of well-founded intellectual dissatisfaction with this prima facie world: the worlds of ‘scientific philosophy’ and of phenomenology, resulting from critical analysis and intellectual reconstruction of the so-called ‘given’ world, and aimed at the discovery of the Real by rationalization without metaphysical transcendence. For obvious reasons, of competence no less that of space, the treatment must be general and selective: no truly exhaustive consideration even of all the characteristic worlds of science, based on various special sciences and special assumptions, can here be contemplated. The discussion will, therefore, be limited to certain broad principles commonly involved in such speculations, with a somewhat more direct consideration of one which, coming from a trained philosopher, is less likely to ignore fundamental philosophical difficulties than those which issue from eminent scientists in their reflective moods.

Objective Content Empty Time Imaginational World Scientific Philosophy Metaphysical Relativity
These keywords were added by machine and not by the authors. This process is experimental and the keywords may be updated as the learning algorithm improves.

The distinction which I draw between the true rationalization of “vagrant experience” and its ‘sophistication’ corresponds broadly with the two accounts given by Spinoza in the Ethics and in the Tractatus de Intellectus Emendatione of the nature of Ratio, the ‘second kind of knowledge.’ (See my Benedict de Spinoza, The Elements of His Philosophy, pp. 73-5, 85). It is not suggested that, on its own ground, antural science is ‘sophistical,’ but only when taken as ultimate.