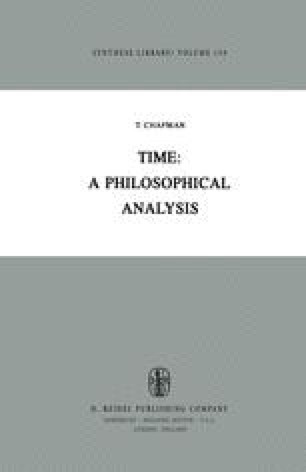 Temporal Order and the Causal Theory of Time

The idea of temporal asymmetry in one of its senses is perfectly clear. It consists simply in the fact that the relation ‘earlier than’ is asymmetrical, i.e., if E is earlier than E 1 then E 1 is not earlier than E (at least on the assumption that time is not cyclical, i.e., that the series of events is not best represented geometrically by a closed curve1). The relation is also transitive. If E is earlier than & and E 1 earlier than E 11 then E is earlier than E 11; irreflexive, i.e., no event is earlier than itself (again on the above assumption); and binary, it always relates a pair of times (or two classes of events) where the domain of the relation is local times or (sets of) events occurring at the same place. (Some of the difficulties about relating temporally, events which are spatially separated are discussed below). As well as always relating some pair of times ‘earlier than’ relates any two members of its domain which are not identical; hence it is said to be “connected”. (Strictly speaking this is true only on the assumption that there is no first or last time, or, if we restrict the domain to all local times except the first and the last, and assume that the resulting series is open, i.e., has no first or last member). Hence a relation which is connected is binary. It also follows that ‘earlier than’ is serial. A relation R is serial if (χ)(∃ γ) Rχγ, i-e., if everything bears the relation R to something (e.g., ‘less than’ is serial in the universe of natural numbers).

Causal Relation Temporal Order Serial Order Perceptual Time World Line
These keywords were added by machine and not by the authors. This process is experimental and the keywords may be updated as the learning algorithm improves.
This is a preview of subscription content, log in to check access.