The Comparative Study of the Planets 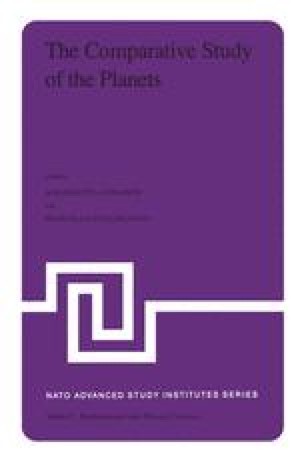 A theory of planetary differentiation is developed which incorporates the tendency of convective heat transfer to maintain very high average viscosities throughout planetary interiors under a wide range of conditions. It is concluded that the separation of a silicate crust from Earth’s silicates throughout that planet1s history has been wholly dependent on local and transient heating events having their origin in strain energy that is stored throughout the convecting medium. Such slip events are contingent on cold planetary surface material being involved in the convective flow. Consideration of the overall efficiency of conversion of radiogenic to deformational heating suggests that Earth’s silicates would only be partly separated into a crust and mantle even if there had been no remixing. This is even more true for smaller planets.

The separation of core material from silicates is far more influenced by the gravitational energy this process converts to heat. In the cases of Earth and Venus it was so important in catalysing the process that the regulation of a high viscosity was temporarily broken and the separation of core material effectively complete at the time one could say planetary accumulation had finished. Smaller objects may have had a post accretional phase in which density differences due to core formation rather than thermal expansion controlled the dynamics.

Creep Resistance Heat Transfer Process Terrestrial Planet Core Formation Gravitational Potential Energy
These keywords were added by machine and not by the authors. This process is experimental and the keywords may be updated as the learning algorithm improves.
This is a preview of subscription content, log in to check access.