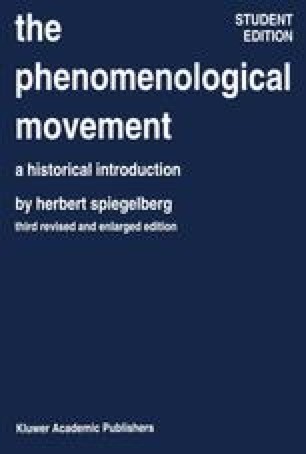 The Phenomenological Movement pp 166-267 | Cite as

There was no such thing as a definite beginning of a Phenomenological Movement, let alone a school, in Husserl’s wake, just as little as there had been a deliberate and clearly marked founding of phenomenology in his own development. But around 1905 Husserl began to attract a number of students, in the beginning chiefly from Munich, who developed a kind of group spirit and initiative which led gradually to the formation of the Göttingen Circle.

Literary Work Intentional Object Phenomenological Method Transcendental Phenomenology Original Movement
These keywords were added by machine and not by the authors. This process is experimental and the keywords may be updated as the learning algorithm improves.
This is a preview of subscription content, log in to check access.