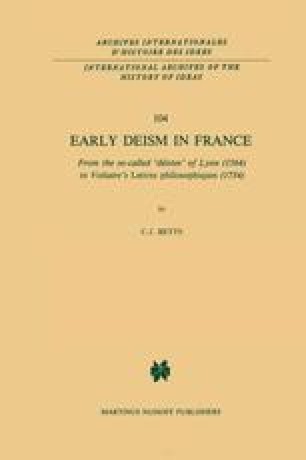 In the decade between the Militaire philosophe’s treatise and the Lettres persanes, the Jansenist controversy gained in intensity, before and after the death of Louis XIV in 1715; the influence of Fénelon superseded that of Malebranche and Bossuet; and the English deists, notably Anthony Collins, began to be known in France — well after French deism had been created, despite the long-standing scholarly myth that it came from England.1 But the more general association, that with Protestantism, is maintained in the most important French deistic work of these years, another anonymous travel-story, the Voyages et avantures de Jaques Massé, full of characters with unorthodox or anti-Christian opinions. Simon Tyssot de Patot, its author, was born in England of Huguenot parents in 1655. He was brought up in France and spent his adult life in north Holland, mostly in the small town of Deventer, where he taught French and mathematics. His biography has been investigated by Aubrey Rosenberg, who shows that Tyssot’s life was uneventful, apart from a struggle to establish himself professionally, until disaster came in old age: the publication of his Lettres choisies in 1726 caused a scandal.2 He was accused of expressing irreligious views, Spinozist and immoral. In 1727, by way of defence, he prefaced his Oeuvres poétiques with a dissertation proving ‘I’existence d’un etre souverainement parfait, comme aussi l’immaterialite et l’immortalite de notre âme’.3 However, all efforts to clear his name having failed, Tyssot was dismissed from his post as professor of mathematics and left Deventer. He died in 1738.

Natural Religion Religious Debate Chinese Theist Biblical Criticism Religious Criticism
These keywords were added by machine and not by the authors. This process is experimental and the keywords may be updated as the learning algorithm improves.
This is a preview of subscription content, log in to check access.