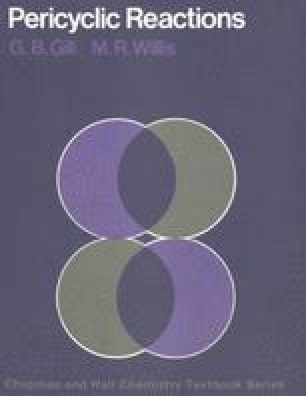 The concept of the conservation of orbital symmetry

The basic tenet of the Woodward-Hoffmann theory is that orbital symmetry is conserved in concerted pericyclic reactions. Their initial papers (1965) utilized a frontier orbital argument. These ideas were developed by Longuet-Higgins and Abrahamson (1985) who used the somewhat more rigorous group theoretical approach, and both of these types of analysis were extended by Woodward and Hoffmann (1965, 1969) to cover the whole range of pericyclic reactions. Their results on the conservation of orbital symmetry were embodied in a single statement — the general Woodward-Hoffmann rule.

Excited Singlet Thermal Control Symmetry Element Correlation Diagram Orbital Symmetry
These keywords were added by machine and not by the authors. This process is experimental and the keywords may be updated as the learning algorithm improves.
This is a preview of subscription content, log in to check access.