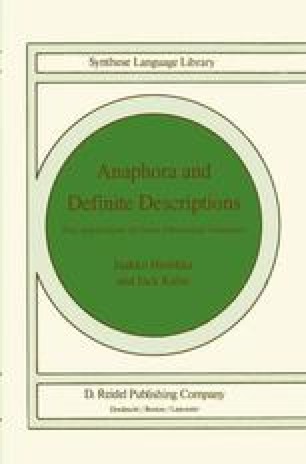 Comparisons with Other Treatments

The three differences (i)-(iii) listed above in sec. 21 between our theory and most other approaches enable us to make certain comparisons here. In historical perspective, it is perhaps not entirely unfair to say that one of the aims of recent treatments of anaphora has been to explain such exceptions to the Langacker-Ross condition that from our perspective are caused by (i)-(iii), especially by (ii)-(iii). One theoretical difference between our theory and some of the other current theories is that, in these competing theories, an attempt is made to account for the exceptions by reference to the syntactical structure of the input sentence S0 of a semantical game. From our perspective, this may be expected to be doubly misleading (a) because some of the exceptions are caused by factors that are essentially semantical, not syntactical, such as the Exclusion Principle; and (b) because the relevant syntactical structure is not that of Ss, anyway, but that of some different sentence making its appearance at a later stage of the semantical game that originally started from S0.

Reflexive Pronoun Exclusion Principle Explanatory Strategy Input Sentence Game Rule
These keywords were added by machine and not by the authors. This process is experimental and the keywords may be updated as the learning algorithm improves.
This is a preview of subscription content, log in to check access.