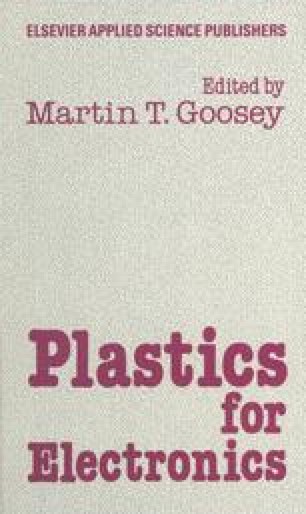 In the early days of semiconductor fabrication, devices were largely packaged in glass, ceramic or metal. However, by the 1960s device manufacturers began to seriously investigate the possibility of encapsulating their products in some of the new plastic materials that were becoming available, as an alternative to the more conventional methods. The main incentives for this move towards plastic encapsulation were the large cost reductions offered over the standard ceramic and metal parts and compatability with mass production techniques, which often allowed several hundred parts to be encapsulated in a single operation taking less than 2 min. Motorola introduced the plastic T092 package in the mid 1960s and by the late 1970s worldwide annual production of plastic encapsulated parts was estimated to have exceeded 10 billion units. The total market in the USA for encapsulants of both active and passive components was valued at well over US $80 million in 1980 and is predicted to have exceeded US $225 million by 1985.

Filler Content Moulding Temperature Mould Cavity Release Agent Mould Part
These keywords were added by machine and not by the authors. This process is experimental and the keywords may be updated as the learning algorithm improves.
This is a preview of subscription content, log in to check access.