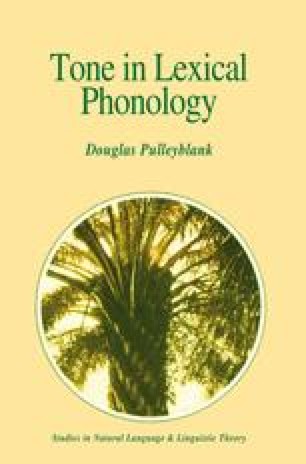 In Goldsmith (1976), it was proposed that languages differ as to how autosegments are introduced into the phonological representation. In the type of languages discussed so far in this book, autosegments (at least some autosegments) are present in underlying representations; conventions and rules apply to the autosegmental representations and surface forms ultimately result. In contrast, however, there are other languages which do not have autosegments underlyingly but receive them at a non-initial stage of the derivation. Goldsmith proposed a particular mechanism to account for (some) such cases, namely the introduction of diacritic accents into lexical representations and the assignment of autosegmental melodies to such accents. The impact of the proposal that autosegments are present underlyingly can be measured by considering the range of phenomena to which it has been applied. Apart from treatments of tone, autosegmental theory has been applied to systems of nasal harmony, vowel harmony, non-concatenative morphology, ‘segmental’ assimilations, etc. The situation is somewhat different for the second type of autosegmental proposal, that of accents in conjunction with autosegmental melodies. While accentual approaches to tone are quite common (particularly in the case of Bantu languages), accentual theory has not been widely applied to non-tonal phenomena.

Association Line Default Rule Accentual Approach Tone Language Lexical Tone
These keywords were added by machine and not by the authors. This process is experimental and the keywords may be updated as the learning algorithm improves.
Download to read the full chapter text