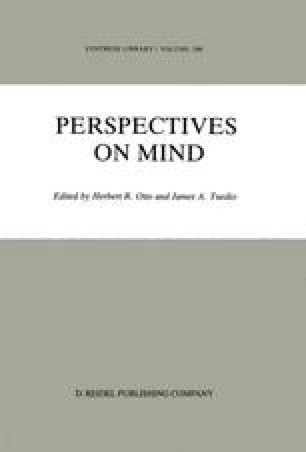 As is probably true of most of Arbib’s philosophical opponents, I am in full agreement with his desire to give a “thoroughly naturalist account” of persons—especially if all that is required is to refuse to “countenance realities… which transcend space and time.” But even at this level of generality, Arbib’s claims appear to be sufficiently vague as to beg some interesting philosophical questions. In current debates in philosophy of mind, naturalism is typically opposed to mentalism. The “thoroughly modern metalist” (Fodor et al.), however, does not countenance non-physical realities. [1] What makes him a mentalist or non-naturalist is his belief that an adequate account of intelligent behavior cannot be given at the level of physical science, that is, his belief that mental terms are an irreducible part of any adequate science of cognition. The modern mentalist (cognitive scientist, AI theorist) holds a functionalist view of mental states and processes, identifying them with their functional role in the ongoing activity of an organism (or machine) rather than in terms of the stuff in which they are realized. Although such a view is in principle compatible with accounts of persons which countenance immaterial realities; in practice, current functionalists believe, not surprisingly, that functionally identified mental states and processes are realized in the strictly material stuff of the brain (or computer).

Thought Experiment Intentional Content Causal Property Everyday World Biochemical Structure
These keywords were added by machine and not by the authors. This process is experimental and the keywords may be updated as the learning algorithm improves.
This is a preview of subscription content, log in to check access.