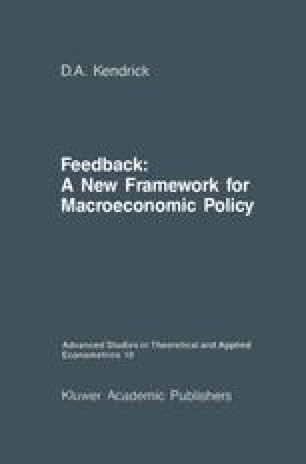 Goals for economic policy are normally stated as “4 percent unemployment” or “a balanced budget.” They do not include any indication of timing. However, there is usually an implicit understanding of time so that the goal for unemployment may be “to reduce unemployment from 8 percent to 6 percent in the first year of the Administration and to 4 percent in the second year.” Then the goal becomes a desired path for the unemployment rate. Similarly, most presidents do not talk about balancing the budget in the first year of their administration but rather about reducing it gradually until it is balanced in the last year of the administration. Here again the goal is a desired path. This chapter on goals in dynamic systems is thus really a chapter on desired paths for a few key economic variables like unemployment, inflation, the deficit, and government spending.

Unemployment Rate Inflation Rate Government Expenditure Government Spending Presidential Election
These keywords were added by machine and not by the authors. This process is experimental and the keywords may be updated as the learning algorithm improves.

For a discussion of desired paths and weights in macroeconomic policy see Pindyck (1973a). I am indebted to A. J. Hughes Hallet for suggesting the point about weights changing with circumstance and the level of activity.