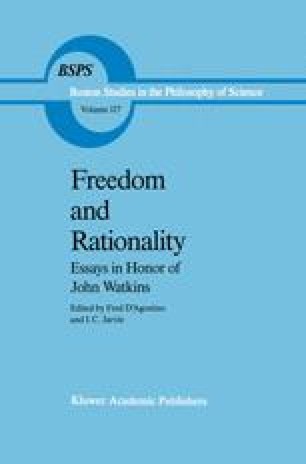 Freedom and Rationality pp 3-21 | Cite as

The Logic of Consensus and of Extremes

Chapter
Part of the Boston Studies in the Philosophy of Science book series (BSPS, volume 117)

In this essay I wish to examine an individual citizen’s set of possible attitudes to the body politic in which that individual is politically active. Since I discuss a diversity of individuals and of political systems, I shall have to present not explanations but explanatory schemata. I will argue that these are easy to handle both as (universalizable) empirical information and as testable hypotheses. My framework will consist of two claims. Generally but not always an individual citizen’s sense of belonging to a political system is a central ingredient in that relationship; otherwise there is little point in discussing the variety of attitudes open to the citizen, much less any schema of varieties of attitudes, especially extreme and moderate ones. And prima facie leaderships see themselves as compromisers, yet at times they may find that an extremist part of the system has seceded, and has thus dropped out of the set of attitudes between which to compromise. These two claims invite models of the forces which regulate extremism, forces that present the extremist with an incentive to advocate as extreme a position as possible without thereby dropping out of the system. Staying within the system in national politics is, obviously, staying within the national consensus: one can drop out of the consensus and yet stay within the nation, and even take over and determine a new consensus. So much for my framework. My intent is to achieve the following conclusion.

Body Politic Social Entity Pluralist Society National Politics National Consensus
These keywords were added by machine and not by the authors. This process is experimental and the keywords may be updated as the learning algorithm improves.
This is a preview of subscription content, log in to check access.