Structures of Ophiolites and Dynamics of Oceanic Lithosphere 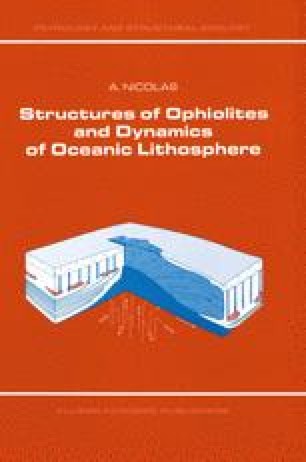 Starting with the general papers of Dewey and Bird’s (1971) and Coleman’s (1971), the problem of the emplacement of ophiolites in the frame of plate tectonics has been considered by many workers (Christensen and Salisbury, 1976; Smith and Woodcock, 1976; Brookfield, 1977; Parrot and Whitechurch, 1978; Gealey, 1980; Moores, 1982; Michard et al., 1985). An extensive review of the possible emplacement models has been presented by Dewey (1976). At some stage, all models imply subduction of oceanic lithosphere. As proposed by Moores (1982) and Coleman (1984), the models can be divided into two families depending on whether the ophiolites were incorporated into continental crust at a passive margin (the Tethyan ophiolites) or an active margin (the Cordilleran ophiolites). In the former case, they rest as giant thrust sheets upon a continental substrate; in the latter case they are incorporated, often dismembered or as mélange, into accretion terranes. Confronted with the complexity of certain natural situations and the profusion of models, for the sake of simplicity, we will contrast below these two types, namely ophiolite nappes with associated high temperature metamorphic aureoles which have been emplaced on passive margins and ophiolite bodies affected by high pressure metamorphism which have been accreted at active margins.

Subduction Zone Oceanic Crust Oceanic Lithosphere Accretionary Wedge Passive Margin
These keywords were added by machine and not by the authors. This process is experimental and the keywords may be updated as the learning algorithm improves.
This is a preview of subscription content, log in to check access.