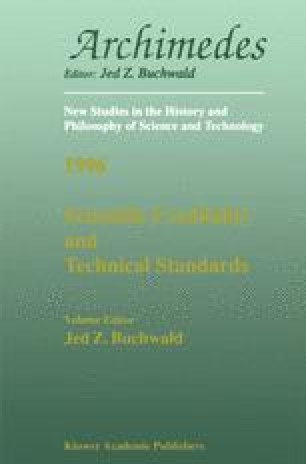 The Zeiss Werke and the Ultramicroscope: The Creation of a Scientific Instrument in Context

I presented a first draft of part of this essay at a conference on “Instruments and Institutions: Making History Today” at The Science Museum, London (April, 1991); I thank Robert Bud and Susan Cozzens for their invitation to do so, and John Krige for his helpful comments and criticisms at the conference. I also presented first drafts of other parts of this essay at History of Science Society meetings in Madison (November, 1991) and New Orleans (October, 1994). Finally, I thank Jed Buchwald and, especially, Gerard L’E. Turner for their many instructive comments and criticisms.

Brownian Motion Gold Particle Optical Glass Optical Instrument Optical Instrumentation
These keywords were added by machine and not by the authors. This process is experimental and the keywords may be updated as the learning algorithm improves.
This is a preview of subscription content, log in to check access.

Cite this chapter as:
Cahan D. (1996) The Zeiss Werke and the Ultramicroscope: The Creation of a Scientific Instrument in Context. In: Buchwald J.Z. (eds) Scientific Credibility and Technical Standards in 19th and early 20th century Germany and Britain. Archimedes (New Studies in the History and Philosophy of Science and Technology), vol 1. Springer, Dordrecht. https://doi.org/10.1007/978-94-009-1784-2_3