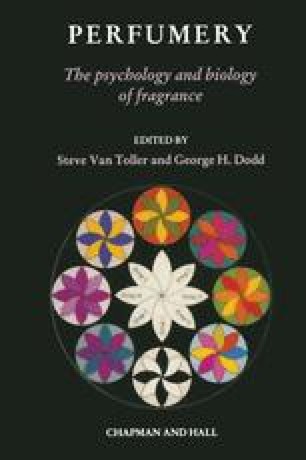 Contingent negative variation (CNV) and the psychological effects of odour

There have been several attempts to measure objectively the psychological effects of odours (Dodd and Van Toller, 1983), but as yet no electrical brain wave responses to odours have been confirmed (Allison and Goff, 1967; Pattig and Kobal, 1979; Tonoike and Kurioka, 1982). In this chapter we will look at the psychological effect of odours on brain activity. We will concentrate on odours that are stimulating or sedative.

Psychological Effect Sedative Effect Contingent Negative Variation Frontal Site Early Shift
These keywords were added by machine and not by the authors. This process is experimental and the keywords may be updated as the learning algorithm improves.
This is a preview of subscription content, log in to check access.