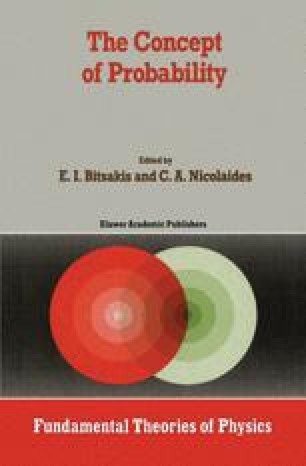 Unification of the Concepts of Quantum Ensembles and Potential Possibilities

This report mainly deals with a possibility of establishing the objective status of quantum mechanics and with closer definition of some principles in the quantum measurements. The report also touches on some aspects in the development of the interpretation of quantum mechanics related to the explanation of interference effects in experiments with single quantum objects.

Statistical Ensemble Potential Possibility Classical Statistical Mechanic Copenhagen Interpretation Soviet Scientist
These keywords were added by machine and not by the authors. This process is experimental and the keywords may be updated as the learning algorithm improves.
This is a preview of subscription content, log in to check access.

Cite this paper as:
Tyapkin A.A. (1989) Unification of the Concepts of Quantum Ensembles and Potential Possibilities. In: Bitsakis E.I., Nicolaides C.A. (eds) The Concept of Probability. Fundamental Theories of Physics (An International Book Series on The Fundamental Theories of Physics: Their Clarification, Development and Application), vol 24. Springer, Dordrecht. https://doi.org/10.1007/978-94-009-1175-8_38