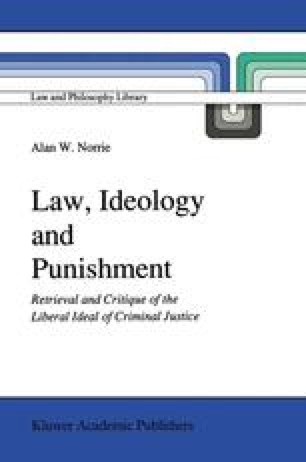 The Birth of Juridical Individualism: Hobbes and the Philosophy of Punishment

The emergence of the liberal ideal of criminal justice with its emphasis on individual responsibility is closely connected with the development of modern theories of punishment. There are three main theories — the retributive, the utilitarian and the rehabilitative — and of these, the liberal ideal is most closely linked with, indeed based upon, the retributive theory of punishment. That is why even modern legal philosophers, writing within a utilitarian tradition, find it important to return to retributive principles when they seek to explain the place of justice for individuals within the criminal law.1 Hence it is necessary to seek the roots of this intellectual tradition in order to get to the heart of the liberal ideal. My argument in this chapter is that those roots are to be found not in the work of the classical retributivists Kant and Hegel where, one might say, the plant has already reached its full development, but in the social contract theory of Thomas Hobbes. This will come as a surprise to many for Hobbes is commonly regarded as of no great importance in the development of the theory of punishment. Furthermore, he is usually seen, where he is discussed, not as a retributivist of any colour but as a utilitarian (by implication opposed to the retributive philosophy) of secondary importance.2

Criminal Justice Social Contract Common People Liberal Ideal Social Contract Theory
These keywords were added by machine and not by the authors. This process is experimental and the keywords may be updated as the learning algorithm improves.
This is a preview of subscription content, log in to check access.