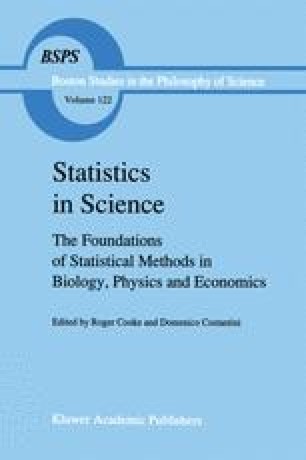 The Theory of Natural Selection as a Null Theory

Chapter
Part of the Boston Studies in the Philosophy of Science book series (BSPS, volume 122)

The main thesis of this paper is that the theory of natural selection is a null theory: it consists of no principles whatever.1 The theory of evolution is commonly said to consist of three parts,

Of these, the first two do indeed have principles, formulated by Darwin and Wallace phenomenologically, then by de Vries, Morgan, and others in microbiological terms, and currently with wonderful precision in the language of molecular biology. There have been many and varied attempts to formulate a principle of natural selection which would be coordinate with these principles of heredity and variation, the formulations typically employing the concepts of fitness, adaptation, or differential reproduction rate. The stark thesis that the theory of natural selection is a null theory conflicts with all of these. I believe, however, that the thesis is implicit in the insistence by neo-Darwinians upon the utterly opportunistic character of the evolutionary process and in their rejection of any general guiding plan in evolution.2 Metatheoretically, what the neo-Darwinians are saying is that the evolution of the biosphere (subsequent to the establishment of the genetic code) is governed by the principles of heredity and variation and by the laws of physics, and constrained by environmental boundary and initial conditions but not otherwise: within these constraints let happen what happens.

Natural Selection Biological Probability Laplacean Idea Softened Variant Explanatory Utility
These keywords were added by machine and not by the authors. This process is experimental and the keywords may be updated as the learning algorithm improves.
This is a preview of subscription content, log in to check access.