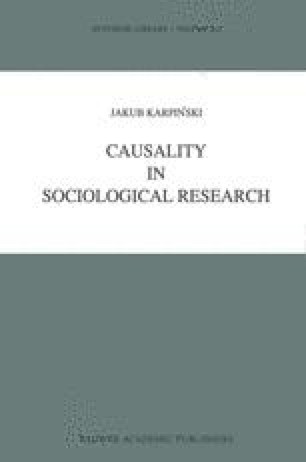 Human Beings and Collectivities. The Problem of the “Level of Analysis” in Sociology

In the controversies over “what is primitive”, the group or the individual, and over how social groups exist, references has sometimes been made to concepts and standpoints drawn from philosophy. It was believed that we have to do with an analogy to, or a variety of, the controversy over universals. The controversy over the way of existence of social reality was identified with, or made similar to, the controversy over whether linguistic facts have their extralinguistic analogues, and if it is so, what those analogues are.

American Sociological Review Ordinary Language Contextual Property Group Correlation Absolute Property
These keywords were added by machine and not by the authors. This process is experimental and the keywords may be updated as the learning algorithm improves.
This is a preview of subscription content, log in to check access.

Cite this chapter as:
Karpiński J. (1990) Human Beings and Collectivities. The Problem of the “Level of Analysis” in Sociology. In: Causality in Sociological Research. Synthese Library (Studies in Epistemology, Logic, Methodology, and Philosophy of Science), vol 212. Springer, Dordrecht. https://doi.org/10.1007/978-94-009-0495-8_7