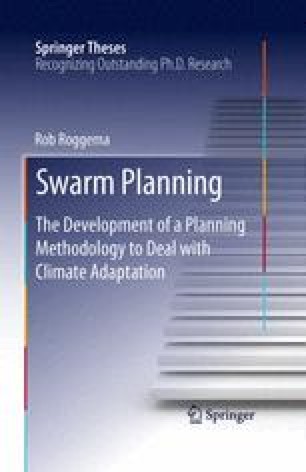 Towards a Spatial Planning Framework for Climate Adaptation

Scientific literature on climate adaptation has mainly dealt with definition studies. Some of these studies aim to clarify and define terms such as vulnerability, resilience or adaptive capacity (e.g. Folke et al., Ecology and Society, 15:20, 2010; Walker et al., Ecology and Society, 9:5, 2004; Walker and Salt, Resilience Thinking, 2006; Adger et al., Impacts, Adaptation and Vulnerability, Contribution of Working Group II to the Fourth Assessment Report of the Intergovernmental Panel on Climate Change, 2007). Another group of scholars studied uncertainty and climate change adaptation (e.g. Dessai and Hulme, Global Environmental Change, 17:59, 2007; Dessai and Van der Sluijs, Uncertainty and Climate Change Adaptation—A Scoping Study, 2007; Kabat, Should the uncertainty in climate scenarios limit adaptation? 2008; Mearns, Climatic Change 100:77, 2010; Meyer, Climatic Change, 2011). Others focused on specific hazards and assessed their risks (e.g. Jones, Natural Hazards, 23:197, 2001; Handmer, Climate Change, Adaptive Capacity and Development, 2003; Downing et al., Climate, Change and Risk, 1999; Beer, World Resources Review, 9:113, 1997). Finally, a share of scientific papers focused on governance and ways to respond to the impacts of climate change (e.g. Adger et al., Adapting to Climate Change: Thresholds, Values, Governance, 2009; Olsson et al., Ecology and Society, 11:18, 2006). Only a limited number of research projects focus on spatial planning for climate adaptation. It is illustrative that ‘the Earthscan reader on Adaptation to Climate Change’ (Schipper and Burton, 2009) fails to include a chapter on spatial planning. Even ‘Planning for Climate Change’ (Davoudi et al., 2009], a major work taking planning as the major theme mainly focuses on processes, policies and specific topics, such as transport. The predominant part of this book focuses on mitigation; only a few pieces cover spatial planning, urban form or urban design. With the exception of Wilson (Planning for Climate Change; Strategies for Mitigation and Adaptation for Spatial Planners, 2009), these parts are mainly oriented on cities and urban areas. So far, there is only one book that specifically positions climate adaptation as a challenge for spatial planning (Roggema, Adaptation to climate Change: A Spatial Challenge, 2009).

This chapter has been published previously in Smart And Sustainable Built Environments: Roggema, R., van den Dobbelsteen A., Kabat P. (2012). Towards a spatial planning framework for climate adaptation. SASBE, 1(1), 29–58.

This research was made possible by the contribution of the Dutch Ministry of Housing, Spatial Affairs and the Environment and by support of the Dutch ‘Climate Changes Spatial Planning’ programme.

We would also like to acknowledge the four anonymous reviewers, who have been reviewing our article extensively and hence contributed to the quality of our final work.

The framework of  Chap. 2 is taken as the basis for further development in  Chap. 3. In this chapter Swarm Planning theory is build up. Complexity theory and Spatial Planning Theory are used to create the fundamentals of the theory. The rationale for needing this new theory lies in the fact that current spatial planning paradigms both seen from an academic as practice perspective, lack the possibility to deal with problems that are not straightforward, clearly defined and predictable: the so-called wicked problems. The majority of planning literature is still focusing on well-known problems and is mainly operational within a governmental context. An analysis of the recent two years of academic publications shows that 94 % of the articles discuss traditional topics and approaches.

A way to overcome this is to incorporate the findings of complexity theory in spatial planning theory. This article/chapter introduces the principles of ‘Swarm Planning’, which aims to create plans that are capable to enhance ‘swarm behaviour’ of the spatial system. This behaviour, learnt from principles in nature, helps the spatial system to increase the overall resilience and lessens the impact of uncertainties, complexity and change. There are two Swarm Planning strategies identified. The first is the introduction of a strategic intervention at a specific location in the system, which influences the self-organisation of the system as a whole in order to become more resilient. The second strategy is to attribute individual spatial components with Complex Adaptive System (CAS)-properties allowing each component to perform self-organisation. Each of the components is emerging freely and self-organises. All elements together will then develop new spatial patterns, which are of higher resiliency than the state of the system before. These Swarm Planning principles are illustrated in a pilot design for a bushfire resilient landscape in Bendigo, Australia. This chapter is published as a book chapter in Sustainable Energy Landscape s and as part of the proceedings of SASBE 2012.