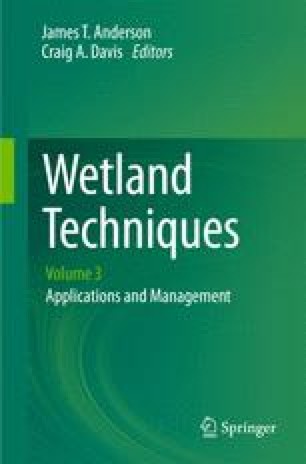 Management of Wetlands for Wildlife

Wetlands are highly productive ecosystems that provide habitat for a diversity of wildlife species and afford various ecosystem services. Managing wetlands effectively requires an understanding of basic ecosystem processes, animal and plant life history strategies, and principles of wildlife management. Management techniques that are used differ depending on target species, coastal versus interior wetlands, and available infrastructure, resources, and management objectives. Ideally, wetlands are managed as a complex, with many successional stages and hydroperiods represented in close proximity. Managing wetland wildlife typically involves manipulating water levels and vegetation in the wetland, and providing an upland buffer. Commonly, levees and water control structures are used to manipulate wetland hydrology in combination with other management techniques (e.g., disking, burning, herbicide application) to create desired plant and wildlife responses. In the United States, several conservation programs are available to assist landowners in developing wetland management infrastructure on their property. Managing wetlands to increase habitat quality for wildlife is critical, considering this ecosystem is one of the most imperiled in the world.

Coastal Wetland Emergent Vegetation Coastal Marsh Submerse Aquatic Vegetation Conservation Reserve Program
These keywords were added by machine and not by the authors. This process is experimental and the keywords may be updated as the learning algorithm improves.

Disclaimer: The use of trade names or products does not constitute endorsement by the U.S. Government.

The following are some brief ideas of classroom exercises for introducing students to wetland wildlife management.

Overview: Wetland plants often serve as an indicator of habitat quality for wildlife. In particular, seed, tuber, and aquatic invertebrate abundance can be used to assess wetland quality for waterfowl and other waterbirds. The abundance and distribution of food resources are among the most important factors that influence habitat selection by migratory waterfowl. As energy needs change throughout the annual cycle (see chapter discussion), so do the types of food consumed by waterbirds.

Goal: The goal of this exercise is to expose students to the concept of diet analysis and food selection. Knowing foods selected by waterbirds can help guide wetland management practices and teach students about the diversity of foods necessary to provide quality habitat for migratory waterfowl.

Goal: The goal of this assignment will be to expose students to three common methods (i.e., constants, direct estimate, prediction) used for estimating DEDs. This assignment will provide an understanding of the number of dabbling ducks that can be energetically sustained in a wetland or agricultural field for a given amount of time. The skills developed during this assignment are commonly used by waterfowl biologists.

Instructions: Each student will be required to work four problems on estimating DEDs. All work must be shown to receive full credit; however, you may use spreadsheet functions to assist in calculations (if approved by the instructor). Partial credit will be given for computational but not procedural errors. For all problems, use the DED equation in this chapter, with daily energy requirement (DER) of waterfowl = 294 kcal/day.

Overview: Giant Canada geese (Branta canadensis maxima) were once relatively rare throughout mid-continental North America. However, harvest management, restoration efforts, and changes in agricultural practices have led to increases in Canada goose populations and conflicts with human land use. However, many individuals value Canada geese, so managing geese that are found to be a nuisance is not always a straight-forward process.

Goal: The goal of this exercise is to present students with a realistic situation where Canada geese are abundant and deemed problematic by some individuals but not others. Students will build logic and debating skills useful in resolving natural resource conflicts.

Exercise: Canada geese may be especially abundant near urban areas, where they may be largely undisturbed, yet these geese will also disperse to suburban or rural areas as populations increase. In this scenario, several farmers adjacent to moderate-sized city (e.g., population = 250,000) have requested removal of Canada geese that have bred in the area and are causing substantial damage to their emerging soybean crops. The farmers have requested the state natural resource agency destroy the birds immediately to stop their financial loss. Word of the farmers’ request has reached user groups, such as the local Ducks Unlimited chapter and bird watchers, who are upset about the possible removal of the geese. Local environmentalists on the other hand think it is a good idea to reduce population size because the geese and their young are defecating in a nearby water source, negatively affecting water quality, and serving as a possible source for harmful bacteria. The state natural resource agency has called a public hearing to discuss concerns on all sides before developing a conflict–resolution plan.

Instructions: Divide the class into four groups = farmers, bird watchers, local Ducks Unlimited chapter, and environmentalists. Each group is responsible for making an argument for why or why not the geese should be removed. It is recommended that each group be allowed 1 week to perform research and prepare their statement. The instructor (serving as the natural resource agency) will facilitate the discussion. After points are made by each group, the class needs to work together to develop a conflict-resolution plan. Innovative solutions are encouraged.

Overview: Nutria (Myocaster coypus) is an exotic rodent to North America that was introduced for fur trade. In Louisiana, this species has had significant effects on coastal marsh vegetation and ecosystem processes. The effect of a species on ecosystem processes is called a biological feedback. You will be required to read Carter et al. (1999) and discuss how nutria create a biological feedback and contribute to coastal marsh loss.

Goal: The goal of this exercise is to increase familiarity with coastal wetland function, reflect on management activities that might be effective at controlling nutria, and strengthen skills in reading and comprehending scientific papers.

Instructions: Review the three models (nutria, biomass, and area) proposed by Carter et al. (1999), and determine: (1) what factors are most influential in nutria contributing to marsh loss, and (2) what time of year is nutria herbivory most detrimental. If you were going to attempt to restore a marsh with high densities of nutria, what management techniques would you use and why?

Overview: As your first professional position as a wildlife biologist, you have been given the responsibility to manage a moist-soil complex with ten impoundments (see below). Each impoundment is 6 ha with a drop-board water control structure at its lowest end. Elevation changes gradually across each impoundment, encompassing four 0.3-m (1 ft) contours. There is a water supply channel that runs through the middle of the complex. Each impoundment can be flooded independently by allowing the water to flow through the water control structure; assume that water is not limiting. Impoundments are in different stages of vegetative succession (early, mid, and late). You can assume moist-soil seed production in the late, mid, and early successional impoundments is 200, 400, and 600 kg/ha. Historical surveys indicate that approximately 5,000 dabbling ducks will use the complex each day for 110 days during migration and winter. Occasionally, diving ducks (Aythya affinis, A. collaris) use the deeper ends of impoundments when they are flooded, and Canada geese roost in open water areas. The area is currently closed to waterfowl hunting but the director of your natural resource agency wants to open hunting on at least a portion of the area or during certain days of the week. You are responsible for crafting a management plan for this complex that provides habitat for breeding wood ducks and amphibians, migrating shorebirds, and migrating and wintering waterfowl. You also need to draft recommendations for hunting. Although the director is comfortable with managing this area for non-game wetland wildlife, the focus of management activities should be on waterfowl.

Goal: The goal of this exercise is to apply concepts and techniques in this chapter to a realistic scenario. This exercise will strengthen the understanding of wetland wildlife life cycle needs and how to use management techniques to meet those needs as well as public demands of hunting.
Instructions: