Space–Time Design of the Public City 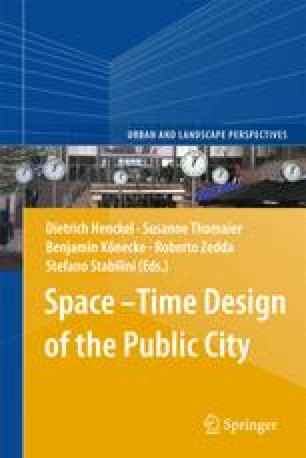 Time Walks belong to a series of exercises, workshops and artistic projects using different media. They aim at increasing our attention towards the temporal and spatio-temporal aspects of the environment, at making us discover hidden and unsuspected rhythmic structures and helping us appreciate their aesthetic potential, a potential that so far has received little attention, as it is not (yet) part of the recognized parameters of environmental aesthetics. In fact, outside the recognized temporal arts, there is (yet) no such thing as aesthetics of time, i.e. aesthetics of everyday periodicities, speeds, pauses and so on. Nor have cultural studies so far acknowledged the role of the different forms of temporal organization in various cultures as components in their own right of the cultural heritage. But it is not to be seen why only the static spatial configurations and not also the dynamics in a given territory should be the object of aesthetic considerations. Time Walks are short excursions that can be done both in rural and urban environments. During the excursions we stop in one or more places and observe the events in the environment around us. Out in nature we focus primarily on the temporal and spatio-temporal characteristics of natural phenomena; in urban environments the observation is mainly, but by far not exclusively, geared to movements and presence of humans.