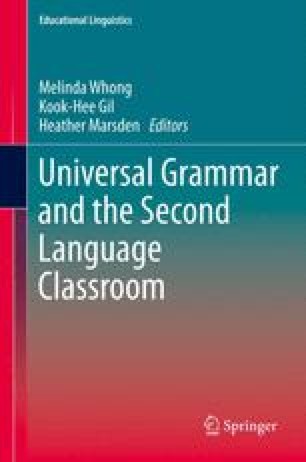 In our study, we focused on the nominal domain, as it is an area of persistent difficulty for Japanese learners of English. We administered pretests, instruction, and posttests to 14 participants. The instruction part covered three weeks of a 15-week semester. The participants were randomly divided into two groups: one instruction group (n = 7) and one control group (n = 7). The control group did not receive any instruction. The posttest was given at the end of the instruction period to both groups and again at the end of the semester. The instruction group received instruction about the properties of definiteness, specificity, and genericity. Learners were also given instruction on the perception of articles in spoken English. The results of our study show that despite the complexity of articles, learners did have a better understanding of specificity and their perception of the indefinite article in oral input improved. We discuss the implications of generative SLA research applied to the language classroom.

Definite Article Negative Evidence Noun Countability Universal Grammar Bare Plural
These keywords were added by machine and not by the authors. This process is experimental and the keywords may be updated as the learning algorithm improves.
This is a preview of subscription content, log in to check access.

This study has been supported by a Grant-in-Aid for Scientific Research (B, 21320078) from the Japan Society for the Promotion of Science to Noriaki Yusa.

An important distinction in English is that a cannot be interpreted as definite in any context as in (1) and (2). ?? means it is odd:

a. A man walked into the room. After thirty minutes a man left. = indefinite

a. A man just proposed to me in the orangery (though I’m much too embarrassed to tell you who it was). = indefinite

b. A man walked into the room. After thirty minutes a man left. = ??definite

The indefinite article a is specified as indefinite where the second use of the indefinite in (1a) and (2a) (a man) can be either specific or non-specific but it cannot be interpreted as definite as in (1b) as a man is a nonunique referent. Similarly, in example (2b), reference to A man cannot be indefinite if referring to the same individual.

a. A man walked into the room. After thirty minutes a man left. = ??indefinite

b. A man walked into the room. After thirty minutes the man left. = definite

a. I’d like to talk to a winner of today’s race – whoever that is; I’m writing a story about this race for the newspaper. = ??indefinite

b. I’d like to talk to the winner of today’s race – whoever that is; I’m writing a story about this race for the newspaper. = definite

a. I’d like to talk to a winner of today’s race – she is my best friend! = ??indefinite

b. I’d like to talk to the winner of today’s race – she is my best friend! = definite

The examples in (4b) and (5b) show that there is going to be a winner of the race and there can usually be only one unique winner. In (4b) the speaker does not know who the winner will be but knows that there will be a unique winner (the person who comes first) and in (5b) the speaker refers to a particular individual in the race who is her best friend.

Think about example (6) below:

(6) Mary’s gone for a spin in the car she just bought. = definite

In (6) the hearer does not know the car. He/she cannot describe the car unless the hearer saw the car. The definite article in (6) shows there is only one car that is being described. It means that Mary bought only one car. What about example (7):

(7) Mary’s gone for a spin in a car she just bought. = indefinite

In (7) we have an indefinite article. But, we could be talking about one car or it is possible Mary bought more than one car.

All generics look the same:

a. An elephant never forgets.

b. The elephant never forgets.

What about the examples in 2?

(2) a. The sunflower blooms in spring. [generic]

b. The sunflower bloomed in spring. [nongeneric]

a. The potato was first cultivated in South America.

b. Potatoes were introduced into Ireland by the end of the 17th century.

We call NPs like the potato in 3. a or potatoes in 3. b generic NPs. The underlined NPs in 3. do not refer to particular or specific potatoes but rather a group of potatoes in general. It does not refer to an ‘ordinary’ individual or object.

Certain types of verbs such as die out, extinct, invent and widespread are only used with the definite article. See examples in 4:

a. The lion will become extinct soon.

b. Lions will become extinct soon.

d. A lion will become extinct soon (means a certain type of lion).

a. A beaver builds dams.

c. A lion has a bushy tail.