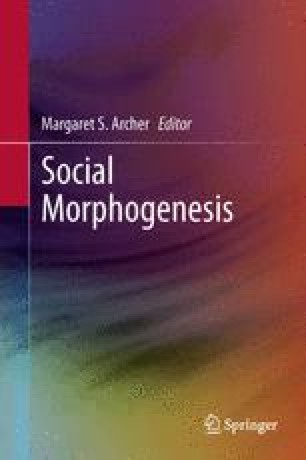 Network Analysis and Morphogenesis: A Neo-Structural Exploration and Illustration

This chapter looks at the extent to which network analysis and a neo-structural approach to social phenomena can contribute to the morphogenetic approach in exploring the notion of Morphogenetic Society. An initial summary presents network analysis, in combination with other methodologies, as a technique exploring morphostatic and morphogenetic processes at the meso-level of social reality. An empirical illustration suggests that fundamental social processes (solidarity, control, socialization, regulation, etc.) driving the co-evolution of structure, culture, and agency can be further specified and understood within such a dialogue. In order to illustrate this programmatic perspective an example is provided: a network study of a 450-year-old French institution for the social control of markets. The focus is on the surprising resilience of this institution as seen through the cyclical dynamics of a key network (the advice network) operative among its lay judges and their judicial decisions based on normative, cultural choices. This case in point raises the question of when a change of network should be considered enough of a change to constitute a case of morphogenesis. It thus illustrates the need for further specification in theorizing morphogenesis, morphostasis, and homeostasis.

In its complaint, Company M asks that the Tribunal fine Company G the sum of 10 762 900 euros in damages. In addition to the subsidiary claim, they ask that an expert be appointed to calculate the loss.

Using its discretionary authority, the Tribunal did not call in an expert to evaluate the loss.

After an examination of the profit rate and the basis for the turnover maintained by the plaintiff, as well as an analysis of moral and material damages and the loss of competitive capacity, the Tribunal evaluated the loss as equal to less than 3 % of the sum initially asked for.

Similarly, on the subject of profit rate the Tribunal declared that “in heavy industries, where competition is fierce, producers apply a profit margin of 10–20 % to the production costs of the materials they order.” The Tribunal declared a rate of 10 %.

Concerning the basis for the turnover, the Tribunal stated that Company M did not provide proof of its allegations, and considerably exaggerated the alleged loss.

In the end, the Tribunal declared the absence of all moral damage, notably reasoning that “the risks of litigation are inherent to business and may always arise during the life of a company.”